Modbury is a beautiful small market town in the heart of South Devon and one of the smallest towns in the region, but it is most famous due to its shops’ policy of banning the use of plastic carrier bags in 2007, long before the rest of the UK. The town has many ancient and historic buildings and is set in a valley, with most of the streets being on a hill. It is very picturesque and has a wealth of interesting and individual independent shops. Three pubs and several restaurants offer great choice for eating out. 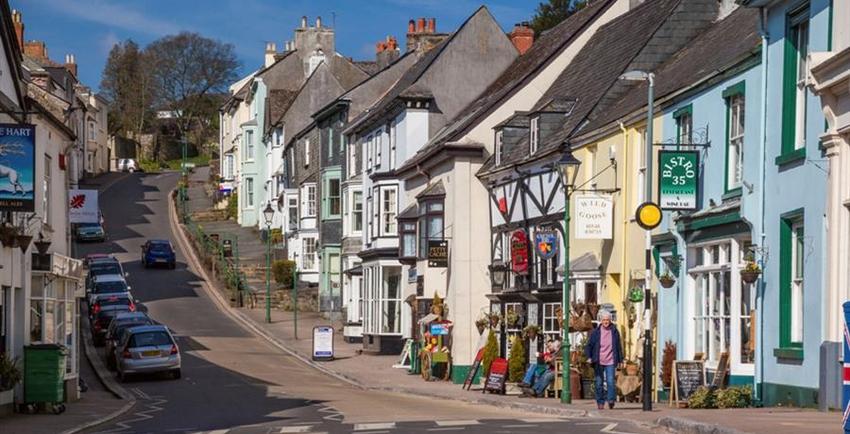 The town is nestled in the beautiful, rolling farmland, so characteristic of the area. It is almost picture-book perfection, with its church spire dominating the scene for miles around. Many beaches can be easily reached from the town, as well as being within a few miles of Dartmoor. There are a great many walks near to the town and it is very dog-friendly too!

Much of the wealth of Modbury was originally built on the wool trade. The population in 1801 was 1,813 – strangely it remained much the same until very recently. The impact of mechanisation on the processing of the wool, and the fact that the railway network did not include Modbury, was to have a detrimental effect on the fortunes of the town during the 1800s.

However, Modbury today is a thriving and vibrant small town, with a well-earned reputation for being a very friendly place to visit, with a great deal to see and do.

During the English Civil War two battles took place there, one in 1642 with a victory for the Royalists and the other in 1643 with a defeat, nothing if not even-handed! Runaway Lane, which is now a green lane and a lovely walk is said to have been the route used by the two thousand Royalist troops to escape after their defeat.

Another of Modbury’s claims to fame is that it was the first town in the UK to become plastic-bag free, in 2007, due to the campaigning of local resident and farmer’s daughter, Rebecca Hosking.

The well appointed wing of the farmhouse is completely self contained and has panoramic views of Bigbury Bay. Bigbury on Sea is a fantastic location for family beach holidays.