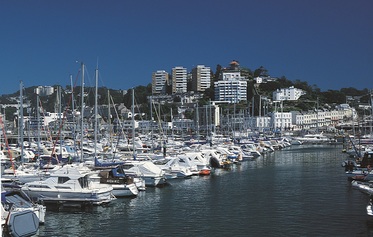 TORQUAY is a seaside town on the English Channel in South Devon. The town is known for its iconic palm trees, sandy beaches and seafood. The stunning coastline is nicknamed the English Riviera, earning it UNESCO accreditation. Torquay Harbour, near the town centre, offers a marina, shops, restaurants, cafes, a mixture of historic buildings like Torre Abbey, attractions and theatres. The famous author Agatha Christie drew inspiration for many of her crime novels in and around this beautiful part of Devon. 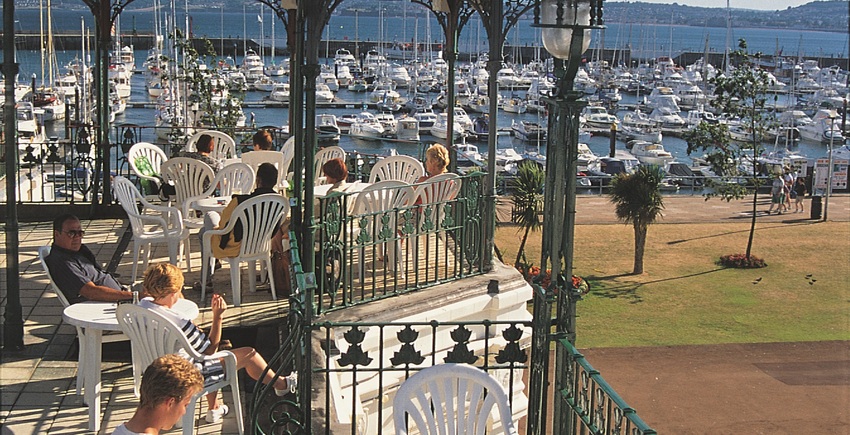 Torquay is a town for all seasons, being very popular with the Victorians as a holiday resort. However, its origins began some 450,000 years ago with early human artefacts found in Kent’s Cavern, one of the many attractions in Torbay. Torre Abbey a monastery was founded here in 1196, which, by the time of its dissolution in 1539, was the richest Premonstratensian in England. Torre Abbey now houses art galleries and extensive gardens.
The harbour side town of Torquay has a long history with Agatha Christie; born in the town and then having a holiday home at Greenway on the river Dart. There’s a famous international Agatha Christie Festival every year, and you can also walk the Agatha Christie mile.
Torquay is a real Devon foodie town, part of England’s Seafood Coast, with a delicious selection of the freshest fish and seafood on offer from the nearby fish market from the fishing town of Brixham. There are eateries galore and even a top Michelin star restaurant situated by the harbour.
There are many activities to be found around this seaside town, which is also famous for its world class sailing. National and international races compete in the stunning horseshoe shaped bay. There are passenger ferries to Paignton, Brixham and Dartmouth. Visit the quintessentially Devon village of Cockington with its 18th century manor house, set in a country park, with glass blowing, a chocolatier, blacksmith and much more. Other attractions include Bygones, Babbacombe Model Village, Living Coasts, Paignton Zoo and a funicular Cliff Railway, or you can walk the famous South West Coast foot path. There is a choice of theatres in Devon’s Torquay with a variety of top shows on at all times.