The founding of the cathedral at Exeter, dedicated to Saint Peter, dates from 1050, when the seat of the bishop of Devon and Cornwall was transferred from Crediton because of a fear of sea-raids. A Saxon minster already existing within the town (and dedicated to Saint Mary and Saint Peter) was used by Leofric as his seat, but services were often held outdoors, close to the site of the present cathedral building. 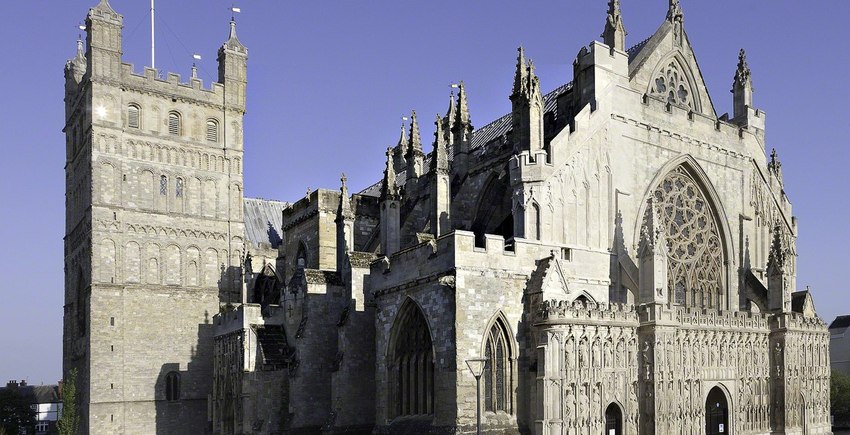 In 1107 William Warelwast, a nephew of William the Conqueror, was appointed to the see, and this was the catalyst for the building of a new cathedral in the Norman style. Its official foundation was in 1133, during Warelwast's time, but it took many more years to complete. Following the appointment of Walter Bronescombe as bishop in 1258, the building was already recognised as outmoded, and it was rebuilt in the Decorated Gothic style, following the example of nearby Salisbury. However, much of the Norman building was kept, including the two massive square towers and part of the walls. It was constructed entirely of local stone, including Purbeck Marble. The new cathedral was complete by about 1400, apart from the addition of the chapter house and chantry chapels.

Like most English cathedrals, Exeter suffered during the Dissolution of the Monasteries, but not as much as it would have done had it been a monastic foundation. Further damage was done during the English Civil War, when the cloisters were destroyed. Following the restoration of Charles II, a new pipe organ was built in the cathedral by John Loosemore. Charles II's sister Henrietta Anne of England was baptised here in 1644. During the Victorian era, some refurbishment was carried out by George Gilbert Scott. As a boy, the composer Matthew Locke was trained in the choir of Exeter Cathedral, under Edward Gibbons, the brother of Orlando Gibbons. His name can be found scribed into the stone organ 'screen'.

Relax in our heated swimming pool and slip into the tranquillity of rural life. Spacious comfortable cottage with indoor and outdoor play areas. Quiet but accessible location for Exeter and the M5.

Two spacious cottages and a cosy retreat for two. Set in peaceful surroundings with stunning views, lovely walks and lots of wildlife to see. Ideally situated for visiting the coast, Exmoor, Dartmoor

Smallicombe Farm is set in an idyllic location of 70 acres of pasture and ancient woodland and offers excellent self-catering holiday cottage accommodation on a real working farm in Devon.

Glamping is camping made easy! Warm, cosy and perfect for a weekend away, these log pods offer stunning views of the countryside, peace and tranquility away from the hustle and bustle of everyday life

No of Glamping Tents: 2

A double ensuite bedroom leading from a wooden staircase awaits you in a rural setting on a working farm. Peaceful and private with own entrance and private sitting room.