Home › chickens › Cattle in the wrong place can do a great deal of damage!

Cattle in the wrong place can do a great deal of damage!

Am I really that scary? Are the males in this household so frightened of me that they’d rather try and hide a mistake and think I won’t find out than confess and take the consequences? Apparently the answer is YES!  In this instance we are not talking about a simple mistake, we are talking about an avoidable mistake with BIG consequences.  Here’s what happened… 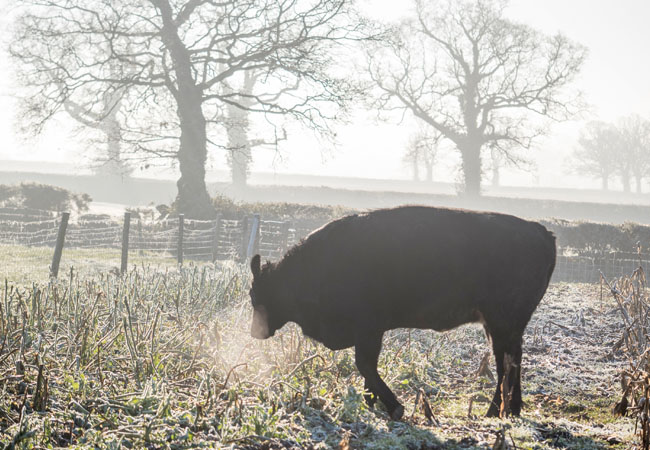 Yellingham Farm, like all farms, is governed by the seasons and, of course, the weather. The Spring brings new life, bouncing lambs, new growth of grass, hedgerows full of wild daffodils and buds bursting from the hundreds of trees on the farm. The Winter has its moments with crisp, white frosty mornings, but as December dawns and we move forward to the arrival of a New Year, the rains appear, the grass diminishes and disappears overnight. The River Tale floods and we watch as the sheep line up against the bare hedgerows for shelter from the wind and rain. The cattle’s sleek, black, mink-like coats which they wear in the summer increasingly become long and thick to protect them from the cold.

It is at this point that the inevitable happens. To save the ground from getting over grazed and poached and from having to use tractors over very wet ground to take hay to our cattle, we decide to bring them in. The day dawns and we bed down one of our large barns with wonderful yellow barley straw and set up big round feeder out in the yard for the hay, so that the cattle can wander in and out to their hearts content and are not confined to being totally inside. Happy cattle mean a happy me!

Two large metal gates enclose the cattle yard and separate it from another large concrete yard outside the farmhouse, my beautiful vegetable garden, large fruit cage and the love of my life……. my polytunnel. The gates are really heavy duty, which they need to be as a mature bullock weighing some 400+ kilos takes some restraining and they regularly rub themselves up against them. I told the boys to check the gates and make sure that all the fittings were in good order. A bit of baler twine will not be sufficient to tie the right hand gate. This was a message delivered strongly on numerous occasions during the first week that the cattle were in.
“Don’t panic Mum. It’s fine. It’s all secure. Stop moaning!”.

Given that I was asleep when the disaster happened, I will recall the story told in Edward’s words:
“I always get up early. It goes back to my days as Executive Chef, when work started at 6am. It’s so peaceful without Janet barking orders at us poor males. It gives us time to prepare ourselves. On this particular morning, it was extremely dark, overcast with every chance of the day being a miserable one weather-wise. Little Lilly, a runt of a Jack Russell, Tilly the beautiful jet black spaniel and dear old Todd, the brown, fox-like collie all greeted me with such enthusiasm, tails wagging ten to the dozen. I put the kettle on the Aga for a much needed cuppa and walked to the back door where the dogs were queued up ready for their first run in the garden and a much needed wee. Overalls on, welly boots at the ready and a steaming hot cup of coffee in my hand, I put on my tattered, very smelly farm coat with the pockets overflowing with baler twine, fencing staples and other broken bits and pieces – I must empty them out – the coat would be much lighter. The first job is to let ‘Madam’s’ other collies out who live in kennels outside, then the chickens, before moving on to check the cattle in the barn. The kennels are to the right of the barns and as usual the 3 collies bound out ready for their day’s work and always make a bee line for the vegetable garden where the chicken house is situated. The poor chickens get gently rounded up for the first few minutes of the day by the collies, but this morning that fixed daily routine didn’t happen. Yes, the collies bounded out as usual, but as they rounded the yard and the 2 metal gates enclosing the cattle yard, they all skidded to a halt and in true collie style crept slowly towards the garden. It was still dark, but my eyes had focused to the darkness and my heart missed not one beat, but at least 100 beats, as there, looming in the distance were Madam’s six beautiful heifers. The baler twine tying the gate had let me down bigtime. The trouble was, as I stood there and told the collies to lie down and not move, I had no idea how “bigtime” this mistake was. The last thing I wanted was the collies to round them up, cause them to run and create even more damage, particularly because they never do what I say in any case. This had to be done quietly and with limited fuss. The collies were soon back in their kennels, totally bewildered by this sudden change to their early morning routine. One metal gate was wide open with the baler twine clearly in pieces. How many times had we been asked to mend the gate catch – doesn’t bear thinking about at the moment. I opened the other quietly so as not to wake her indoors. That was the easy bit. I fetched a stick, walked slowly towards the vegetable patch – fortunately the vegetables are grown in raised beds so hopefully no damage there. The fruit cage looked fine. The polytunnel had no visible holes in the plastic. I approached the cattle calmly as I didn’t want a stampede on my hands. They were nowhere near the lawn in front of the vegetable patch and were quietly grazing in the longer grass surrounding the chicken house. Phew! In the relative darkness, it looked like I had got off lightly. Maybe the odd hole in the long grass, but madam would hardly be able to detect it. Slowly the 6 beasts made their way back to the yard and I quickly fastened the gate with strong rope. Time to get off to work before she gets up”.

I continue…….. Edward is very good, he likes the early morning, so when I get up I can concentrate on my sheep and cattle. The day looked miserable but it was daylight and time to get on with the day’s work. First stop is my collies. Out they bound and off we go. But not today. They seemed a bit hesitant and when they approached the cattle yard they cowed down like they were ready to work. Daft dogs. The cattle were staring at me over the gates with steam billowing from their nostrils as the cold air made its presence felt. They looked happy and content. Next stop, the in-lamb ewes, which are in the field next to the garden. Normally the dogs are under the wooden gate and off at top speed, but this morning they were wandering around the chicken shed. Something wasn’t quite right with them. I sauntered over towards the vegetable beds and fruit cage and suddenly the reason for my dogs’ strange behaviour became apparent. I literally ran around the garden, over to the fruit cage, back around the chicken house before I stopped, sat on the edge of one of my raised beds and cried. I really cried. The damage to my garden was huge. 6” divots from 24 cattle feet, the black netting encasing the fruit cage was destroyed around the back, and to top it all they had climbed onto the raised vegetable beds and eaten my loved and tended Xmas Brussel sprouts. Do you know what I did? I cried again. Then the inevitable happened. Mobile phone out. Dialled Edward and, shall we say, the rest is history! I need not have dialled his number as my voice was so loud bellowing down the phone that he and all of his staff would have heard it 20 miles away.

The gate catch took 5 minutes to mend, the damage probably took 15 minutes to achieve, and I wish I had taken a photo of the boys wheel-barrowing topsoil to fill in the divots, as that took weeks!
Janet
www.yellingham.co.uk