We know many of our guests this Easter will be travelling a few hours in the car to get to South Devon. If your family is anything like ours then the thought of your little darlings stuck together on the back seat with impatient cries of “are we there yet?!” is the only downside of going on holiday! 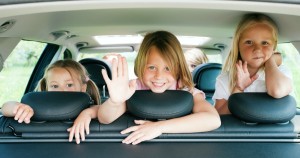 Many families these days have in car entertainment but here are some ideas for good old fashioned travel games for when the kids are tired of the tech or sick of screens.

20 Questions This easy game is great for younger children thanks to its straightforward rules. Player One thinks of a person, place or thing. Everyone else takes turns asking questions that can be answered with a simple yes or no. After each answer, the questioner gets one guess. Play continues until a player guesses the answer correctly.

The Holiday Game A memory based alphabet game for all ages. One player starts off with the line “I went on my holiday and I packed….” followed by an object beginning with the letter “A”. The next player has to repeat all that went before and add an item beginning with “B” and so on all through the alphabet.

The Number Plate Game Children loved to make up stories and this game is great for inspiring creativity and imagination. Each player chooses a passing car and looks at the last three letters of the number plat.  Now make up a story using those letters- the first letter decides the main character, the second letter could be a place or an item in the story and the third letter could be what the character is doing. Alternatively, get everyone to make up a phrase or word using the letters on the numberplate.

The Word Game One person starts by saying a word then each person has to come up with a new word that starts with the last letter of the word given.  For example, player one says ‘car’, player two says ‘rabbit, player three says ‘tree’, player four says ‘elephant’ and so on. Quick-thinking is key – the faster the pace the more fun the game

Who’s Next Door? Traffic jams – an inevitability of motorway travel but not a good combination with restless kids!  Play the game of nosey neighbours-  everyone chooses a window to look out of and takes a quick peek at the person in the car nearest to them. Don’t get caught staring! Its then up to each player to decide what sort of person they are… their name, job, decide where they’ve come from or where they’re heading, what their favourite food is and so on. Give points for the most outrageous or funny descriptions.

We hope all our families have safe, fun and easy travels to Beeson Farm this Easter!