Home › Lambs › A thief in my lambing yard!

A thief in my lambing yard!

Here at Yellingham Farm we always lamb indoors, which makes it easier for me.  It also means any problems, particularly in the night, can be spotted early and dealt with.  Yes, it costs more money because of bedding etc. and yes, the risk of infection is obviously higher, but with the highest standards of cleanliness and good shepherding the process works for us.  It had been a particularly busy day in the lambing yard so husband Edward kindly (not really!) offered to do the night… actually, he was ordered to do the night, and given my mood was tetchy to say the least, all family members knew that if you did what you were told, life would be much more pleasant.  However, if there was a problem I always want waking, whatever time of night.  It was just after 6am and I heard the kitchen door go, which meant only one thing.  Quietly Edward said there wasn’t a big problem, but he was concerned about a ewe.  Every night before I go to bed I lay out my work clothes so that it is a quick process to get dressed.  Actually, it’s normally only socks, jumper over the pyjamas and rubber trousers – what a sight!  He informed me that a short time ago, a ewe that had been scanned for twins had only had a single, wasn’t pushing and he thought she seemed to have given up – so could I take a look at her.  It was light, at last, after the long dark mornings of the winter.  The early morning sun was streaming in through the wooden slats in the barn, lighting up the interior – it always makes me feel good and glad to be in a position to enjoy it. Leaving my warm bed didn’t seem so bad after all.  On spotting us human beings, the ewes first thought was food – the bleating began and reached a deafening crescendo in no time.  The peace and quiet of that stroll down to the barn was over.  Before any feeding commenced I was keen to look at the night’s activities and check on all the ewes that had lambed. We prioritised and I asked Edward to show me the ewe who had the single but was scanned for twins.  He said she was showing no typical signs of having another and therefore decided to move her out of the large pen where she had lambed and put her and the lamb into one of the small pens where they stay for 24/48 hours to mother-up.  Slightly concerned that she had only one lamb he thought he’d, “call the midwife”, which is exactly what he did.  The rules are, if you call me in the night, don’t expect too much conversation – just give me the facts, short and sweet – no banter and certainly no jokes. The scanner we use is brilliant and normally very accurate. The ewe in question had been penned up with her single lamb. It was a cracking large single lamb and my immediate thought was that the scanner was wrong, but I had a niggle at the back of my mind. 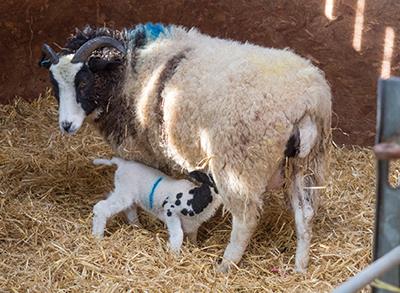 “Can you check her to see if she has another inside?”

My hands are so small and perfect for the job which lay ahead. The ewe was still looking huge and I suspected there was another inside.

On examining the ewe, it was evident within a second that there was a problem. Well, in fact there was no problem. I hadn’t checked her back end as she was stood facing me when I first saw her in the pen. There was no visible evidence that she had lambed, no blood, no afterbirth, nothing.  I didn’t think I needed to examine her, but just to satisfy my theory, I tried; my little hands weren’t going anywhere… she had not lambed. I looked up at Edward and was about the mutter “idiot”, but decided to smile instead.

“What are you smiling at, why don’t you examine her?” My dear husband was confused.

“That lamb is not hers, she has stolen it from another ewe, which means there is a ewe in the big pen where she came from that has lambed and literally has been robbed and this ewe here has yet to have her lambs”.

Edward shook his head in disbelief.  He explained that he didn’t see the ewe lamb but had found her cleaning it up when he came down to the barn and did a check. I asked him if he had his glasses on when he checked!  I nearly added that if he had looked at her back end, I might still be snuggled up in bed, but thought the better of it! 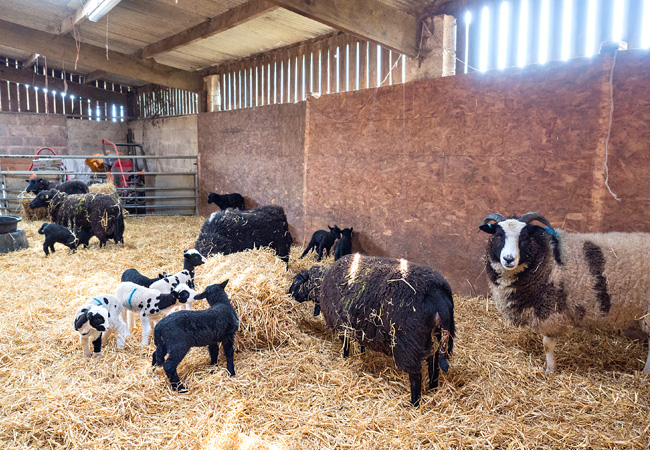 Our ewes are housed in big pens and no one is perfect – things do get overlooked. We both went into the big pen in question and sure enough, there sat in the corner, quite unperturbed was a ewe pushing and in no time at all a lovely large Jacob lamb was born. On getting closer, I said, this is the mum of that other lamb you penned up. She was scanned for 2, the first she had was stolen by a very jealous mother to be. Edward was obviously upset and still waiting for an earful, so with a cheeky, sympathetic grin I said,

“This isn’t the first time this has happened, and it isn’t the last, so don’t beat yourself up – you did the right thing by calling me, otherwise I might have beaten you up!”

All was well in the end.  I was right with my prognosis.  At least that ewe had one lamb to look after, even though she should have had twins!  We let the thief keep her stolen goods until she lambed herself and, because she did have twins, sadly “orphan Annie” as we called her was taken away and put on the bottle with other motherless, but very happy lambs.