In search of the willow tit………

We were delighted to be contacted by the ‘Devon willow tit project’, an ambitious but much needed project, which has been developed in partnership by Devon Birds, Devon Wildlife Trust and Devon Biodiversity Records Centre. The willow tit (kleinschmidt) is in serious trouble, showing the greatest decline of all the species in the period 1995 to 2010, with the breeding range contracting considerably.  In order to establish the current distribution of the willow tit they are going to conduct surveys on the farm in January and possibly February and lots of other areas of Devon as well. 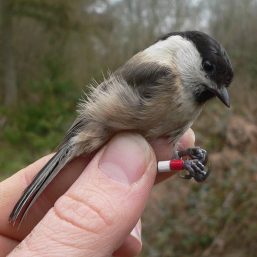 The habitat here at Little Comfort has been identified as a possible breeding site.  As they are not easy birds to identify accurately it will be done with sound recordings, as well as visually, as their call is very distinctive.  Roger and I think that we have identified them in the valley and on the bird table, but as identification is so difficult we are reluctant to say so with certainty.  It would be so good if all the hard work that Roger has carried out on the farm to enhance the wildlife habitat has provided a safe haven for these dear little birds.

Thank you to Devon Wildlife Trust for the photo of a willow tit being ringed as part of the project.