The history of Hot Penny day……

Honiton Hot Pennies Ceremony dates back to the 13th Century, when Honiton was granted a Royal Charter, the ceremony remained unbroken for several hundred years, and to this day has always taken place on the first Tuesday after July 19th. 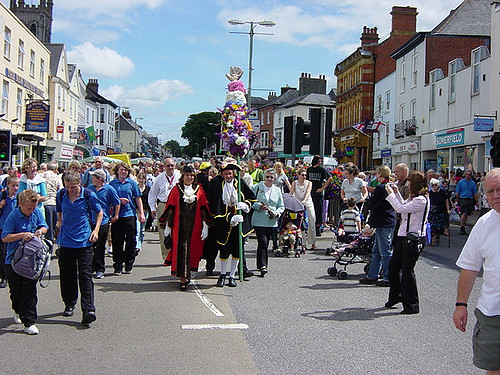 The proceedings begin at 12 noon from the Old Pannier Market, with The Town Cryer (accompanied by The Mayor and local dignitaries) hoisting up a garlanded pole with a gloved hand at the top, proclaiming that “No man may be arrested so long as this glove is up.” This was done to ensure that everyone would come to Honiton for the fair which followed the ceremony, without fear of being arrested for their debts; they would otherwise have stayed away.

The first pennies are thrown from the balcony of the former Assembly Rooms above The Old Pannier Market and then a procession follows the garlanded pole to a number of Public Houses from which “hot pennies” are thrown to hundreds of scrabbling children. The pole is kept on show for the remainder of “fair week” at the last Public House.

The reason behind the pennies being thrown hot was that the affluent people who threw out the pennies took great delight in seeing the peasants burn their fingers whilst collecting them.  Nowadays the pennies are merely warm! 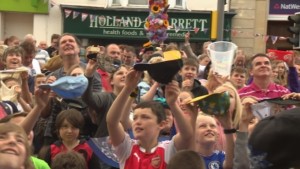 This tradition has also been adopted by the nearby village of Sidbury, where the local primary school pupils enjoy scrabbling for the coins as their ancestors did before them.