Every so often one of our five farm dogs has a bad day. Last Spring it was Barley, our Clumber spaniel, who had what he would describe as a very bad day. He is not a dog to over exert himself. He takes life as it comes, and then slows it down a bit. When let out of the dog shed in the morning, whereas the others will greet the day with yelps of excitement, Barley will cast a half-open eye over the weather outside, decide it is too wet/windy/ cold or hot, then curl up tighter into the straw and resume his sleep. So given his measured and careful approach to each day, you would have thought he had minimised the chances of anything going wrong. 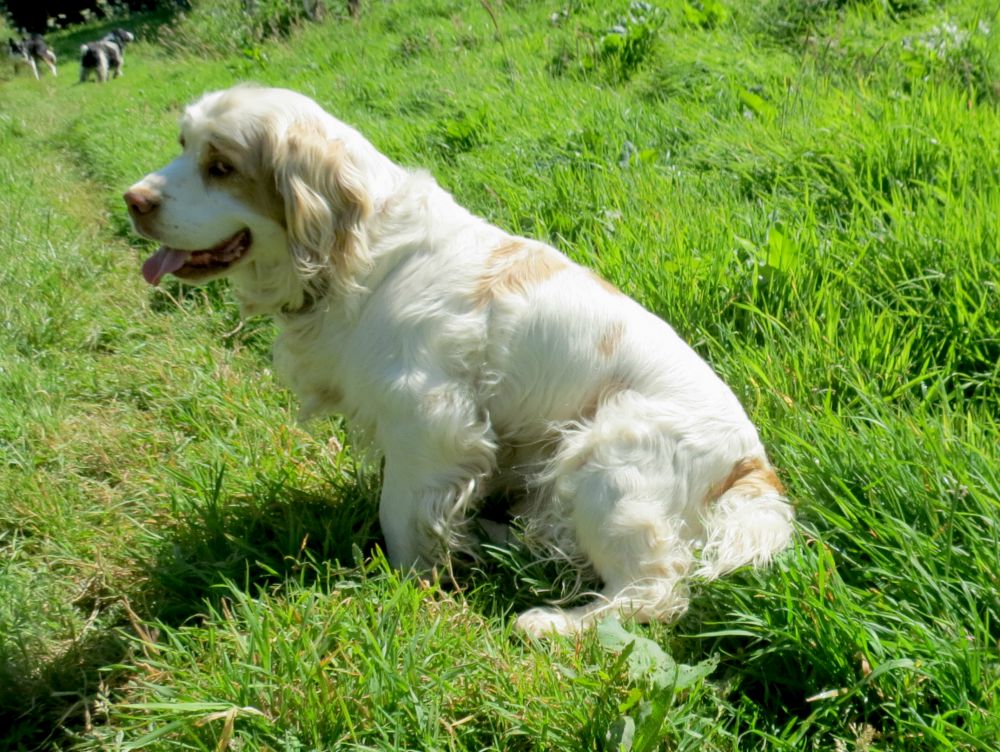 Barley considering his options for the day

Not so on one Spring morning, when I was taking the dogs down our valley to check for any wayward sheep. It is a steep sided valley, with a stream running down it and trees and scrub rising up on either side. A fantastic adventure ground for dogs, full of the scent of pheasants, squirrels, foxes, badgers and deer, and also a lovely walk for us in the Spring, with all the wild flowers looking their best.

The dogs were busy hunting away up ahead when I heard this awful yowling and whining which sounded rather like Barley. Then there he was, sliding backwards down a slope with something red and brown attached to his nose. The four other dogs piled in to the affray and suddenly, out of the whirlwind of dogs, slipped a fox. It shot down to the track closely followed by Holly, Barley’s daughter, who caught it by the back leg as it squeezed through a wire fence. However one tug and it was away, across the stream and up through the gorse and trees on the other side of the valley, leaving our dogs in a rather confused state. 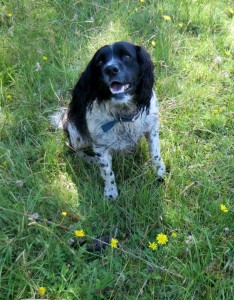 Bruce the sheepdog and Teazel the young Springer spaniel were charging around being tough and looking for something to beat up. Holly was still trying to work out why she could not get through the wire fence like the fox, while Jessie, the old springer, was pottering amongst the ferns trying to remember why she was half way up the slope. Barley was seriously sorry for himself. It seemed he had been poking his nose into an interesting looking hole when the hole’s occupant took exception and clamped its jaws around his nose.  Barley’s reaction would have been to jerk his head out of the hole and had obviously whipped a surprised fox out with it.

We treated numerous puncture wounds on his nose and made a great fuss of him while he tried to come to terms with the painful indignity of the whole episode. He thought the fox should be reported to the RSPCA for cruelty to Clumbers, but I had to point out that there is some law now about hunting foxes with dogs, and that it might be better to keep quiet.

It was several months before Barley would put his nose down another hole, and then it was a very small one, just to be on the safe side.