Home › Uncategorized › A window into the past at Smallicombe Farm…..

A window into the past at Smallicombe Farm…..

Any holidaymakers staying at Smallicombe Farm over the Halloween period need not have worried about being troubled by evil spirits!  A previous guest spotted some strange symbols carved into the wall of the inglenook fireplace and sent a link explaining what they represented and how they are now part of a UK wide study. 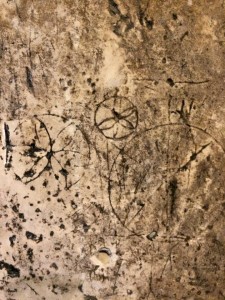 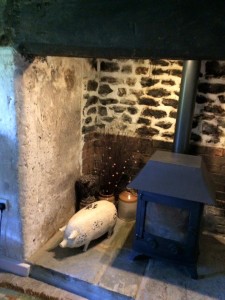 Historic England is calling upon members of the public to help create a record of the ritual markings carved into buildings and which were once believed to ward off evil spirits.

The so-called ‘witches marks’ were often positioned near the entrances to buildings; famous examples include the house where Shakespeare was born and the Tower of London.  There are also markings at the Tithe Barn in Bradford-on-Avon, to help protect the crops from harm, and others have been found in caves, such as the Witches’ Chimney at Wookey Hole.

The symbols were thought to offer protection at a time when belief in witchcraft, and the supernatural, was widespread.

Now the heritage agency, Historic England, says that too little is known about them and they would like help from the public to catalogue examples.

The symbols, also known as apotropaic marks, can be found on medieval houses, churches and other buildings, most commonly from around 1550 to 1750.  They took many forms, but the most common type was the Daisy Wheel.   This looks like a flower and was drawn using a compass with a single endless line.  The belief was that this would confuse and entrap evil spirits before they could enter the building.  Sometimes the ‘witches marks’ took the form of letters, such as AM for Ave Maria, M for Mary or VV, for Virgin of Virgins, scratched into walls, engraved on wooden beams and etched into plaster-work to evoke the protective power of the Virgin Mary. 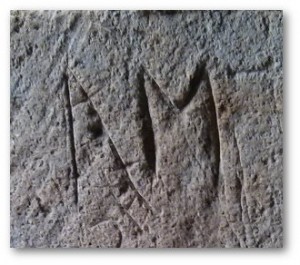 The marks are a physical reminder of how our ancestors saw the world and can teach us about previously-held beliefs and common rituals, but they are easy to overlook.  The recorded evidence about where they appear, and what form they take, is thin.

If you have seen any and would like to take part in the survey go to: https://historicengland.org.uk/whats-new/news/help-hunt-for-witches-marks